Loading...
A Second Chance to Get In The Game

WE BELIEVE IN CHANGE

There is a quote in football made famous by Hall-of-Fame coach Bill Parcells that ”the best ability is availability,” Injuries, coaching decisions and academic eligibility are some of the pitfalls that take young aspiring football players out of the action. For one talented teenager in Florida named Youth JW, a mistake from his past leading him to Everglades Youth Academy was keeping him off the field and keeping his dream of playing football deferred.

“The staff and leadership do some excellent work connecting with and making a difference for the young men at Everglades Youth Academy.” said Denny Armington, Youth Opportunity Foundation (YOF) President. “It just so happens that during some recreational time, one of the staff who is also a high school football coach, identified that this young man was not only extremely talented, but also possessed some leadership traits and simply needed a second chance to chase his dream”.

Through research and advocacy by Joseph Nixon, the Regional Vice President for Youth Opportunity, an opportunity for Youth JW to get off the sidelines presented itself at a nearby private prep academy with a prominent football program in the area. A new hurdle then presented itself when all of the scholarships available to Youth JW only covered part of the required tuition to enroll.

YOF answered the call by awarding him a scholarship grant of $5,800 to help youth JW and his family overcome that financial challenge and continue pursuing his dream. 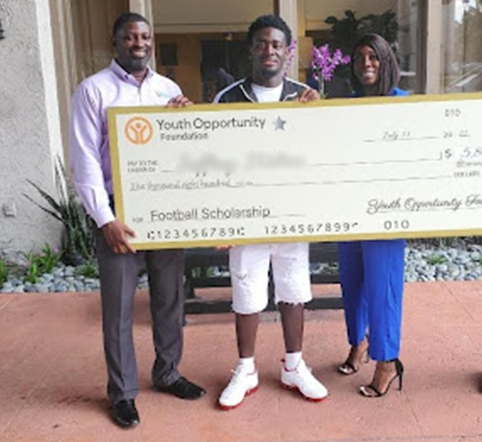 The Youth Opportunity Foundation provides grants, develops partnerships, and commissions applied research to help turn at-risk young people into productive adults. Troubled children deserve the opportunity to overcome the debilitating distress preventing them from reaching their potential, whether that distress is the result of trauma, abuse, mental illness, emotional disorder, or behavioral dysfunction.

“Once my son was released, Mr. Nixon worked diligently as if he was working for his own family, to help us overcome this challenge,” said the Mother of Youth JW. “I really want to thank Mr. Nixon and Youth Opportunity Foundation for making it possible for my son to continue his dream of playing football. They gave us hope again in some of our darkest and most trying days.”

Having football play a part in his own upbringing all the way through college, Armington said the structure of football with teamwork, accountability and the development of soft skills, was a determining factor for deciding to award youth JW with the scholarship.

“The key part of this is demonstrating an interest in a kid. If they understand that someone is trying to help them, you can earn their trust, their confidence and their interest which then makes it possible for you to introduce them to their possibilities,” said Armington.

Having a finite amount of resources to invest in kids who need a second chance like youth JW, the biggest challenge is raising awareness for how YOF is not just another organization raising money or asking for volunteers, but one with a focus on collaborating to create more effective outcomes.

“In order to invest we need money, so obviously donations are the primary thing” said Armington.

“As a society, we are spending billions of dollars to adjudicate, incarcerate and attempt to rehabilitate these kids and our outcomes are resulting in 70 to 90% recidivism in some states. When you or your organization donate or volunteer with Youth Opportunity Foundation, you are collaborating with us to take these things on and really force the outcome of helping these kids overcome the pipeline of youth juvenile justice to the penal system.”

There are many ways you can join us and help the youth in America who need help the most.